Home » News » The Emperor Has No Clothes

The Emperor Has No Clothes 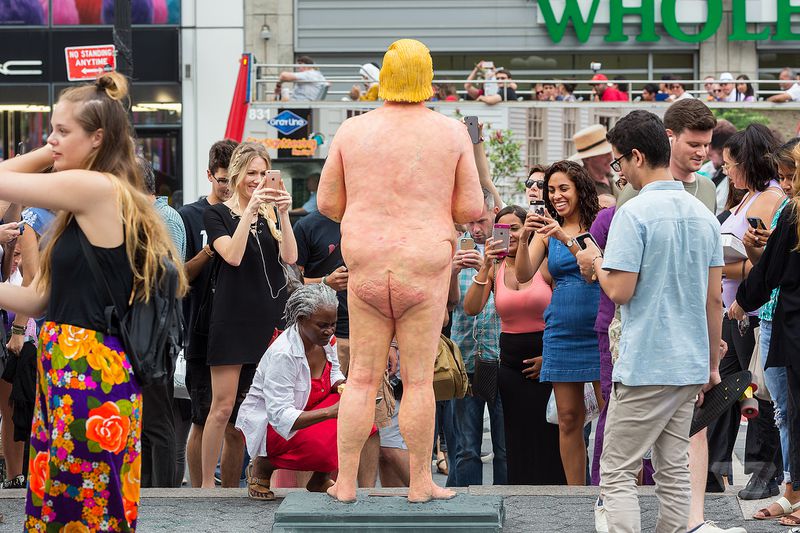 Trump’s policy agenda, other than his insane Tweets and obsession with the Russia Investigation, looks to me like a typical, Republican administration. Nominated by the Republican Party, elected president as a Republican, Donald Trump has effectively governed as a tax-cutting, small government conservative  – eventually becoming a wartime president. As George W. Bush wanted to go after Saddam, (he tried to kill my daddy!) Trump has chosen the war he wants – North Korea versus Iraq for W. Only then, fashion a rationale for bringing the nation to the carnage. This wasn’t an entirely successful approach for Bush, who famously said at the time that it would be for historians to decide if his Iraq policy was just and sound (spoiler: it wasn’t). The Hussein dynasty was removed from a (then) unified Iraq, and the remaining failed state is obviously less a threat to U.S. interests than before 2004, yet the chaos and disorder following a war usually produces this effect, for a while, and then popular resentment always seems to morph into something else more powerful and deadly. Where Al Queda was defeated in Iraq, ISIS has risen from the blackened ashes.

A recent report from the British Royal United Services Institute, an eminent think tank founded in 1832 to protect United Kingdom interests around the world, is a frightfully drab affair titled, Preparing for War in Korea:

President Trump has shown that he is keenly aware of the impact of his actions on his popularity rating. His unexpected decision to authorize a limited air strike against Syria in April 2017, in response to President Bashar Al-Assad’s use of chemical weapons, led to a temporary improvement in his approval ratings. War against North Korea might produce a similar outcome, at least in the short term, rallying public support behind the commander-in-chief and dividing his Democratic opponents. He could, no doubt, emphasize that he was prepared to take a tough decision that former President Barack Obama, who was wary of military adventures, would never have taken. He might also believe that it would be difficult for the mainstream media to maintain their focus on his past ties with Russia when US forces were fighting and dying in a Korean war.

The report here recognizes that the American media and people generally love a good television war and are willing to back most of them at the beginning. Ouch. The report continues the political punditry with a stiff upper lip regarding Trump’s ‘America First’ policy:

This approach has already been reflected in the decisions to withdraw from the Trans-Pacific Partnership negotiations and the Paris Agreement on climate change. Trump may also be close to taking a decision on whether to undermine the nuclear deal with Iran…

A decision to attack North Korea, seeking to protect the US from a possible future threat, even if this risks devastating attacks on regional allies, would be the most striking demonstration of America First so far, defining a Trump presidency just as surely as the Iraq War did for President George W Bush.

And how about this for a final buzz kill:

Casualties in such a conflict would likely reach the hundreds of thousands, even if no nuclear weapons were used. There could be far-reaching consequences for the global economy, involving sustained disruption of vital supply chains and markets.

The British are perhaps the most knowledgeable (and fearful) of an ‘American First’ policy, probably since the Battle of Yorktown, and have the most to lose because of our ‘special relationship’ with Dear Old Blighty. The last America first movement that worried the staid British so much was the isolationist movement of WWII in America, who watched patiently as the Rape of Nanking went down in China, and as London and it’s people were nearly razed to the ground during the Battle of Britain, before the cavalry rolled in to save the day. America first means everyone else, including Britain and our closest allies, comes after.

North Korea’s leaders are well aware of the fate of Saddam Hussein of Iraq and Muammar Gaddafi of Libya – both coerced into giving up their nuclear weapons programs only to be overthrown in US-led invasions (in which the UK tagged along). The US would never have attacked Hussein or Gaddafi if they had already acquired a nuclear weapon. To demand that North Korea relinquish it’s nuclear weapons program is a fool’s bargain. They already have them.

Korea has, for most of it’s history, been a vassal state to the military power projected from the north and east from Russia, China and Japan. Korean history, though not as ancient as their Asian neighbors in China and Japan, parallels Vietnam and Cambodian history in more often being overrun rather than triumphant conquerors. The dynastic power of the Han people made China a world powerhouse, making the House of Windsor look like a cadet branch of the Saxons. Professor Michael Wood presented a fine series on the history of China called The Story of China on PBS this year and if you missed it, it’s worth a look. Professor Wood’s earnest respect and awe for human culture, especially his curiosity and wonder, make him a great storyteller. Ken Burns has some of that greatness in him as well, displayed in his latest (and my opinion, greatest…so far) documentary produced: The Vietnam War. In Dr. Wood’s and Ken Burns’ stories, we have a perspective on two Asian nations that should directly inform our baby steps to war in Korea. It should be no surprise that Donald Trump still wants to pull the plug on PBS…

Anyone watching The Vietnam War may have caught the unique name ‘McPeak’ among the airmen interviewed as retired four-star general and former Chief of Staff of the Air Force, General Merrill McPeak. He spoke most forcefully about his desire to do his job well in Vietnam and to stop traffic on the Ho Chi Minh Trail by delivering his ordinance with deadly accuracy. With such capable war fighters and such high-tech weapons on our side, his analysis that we did everything right in hitting the trail over and over again – to no avail – because a determined enemy was convinced of the rightness of their cause, leads us to his most hard-won conclusion of the war: make sure you fight the right one. Make sure the enemy is actually what you say they are or you will most probably lose.

McPeak holds the Vietnamese to a high level of respect and admiration to this day, earned from their tenacity and belief in themselves. His words should be heard and understood by a generation unaware of the underlying, human and financial cost of a ‘television war.’ Trump knows that the tail wags the dog with American military adventures and he now intends to start using his ancient Chinese secret: Sun-Tzu. Tzu’s The Art of War is what armchair generals and businessmen claim as their extensive knowledge of tactics in war that make them understand the nature of war better than those who have actually served in war. These uber men (and women!) read the book – which basically says lie and deceive your enemies until you can finally annihilate them – and think that because it works (how can a millionaire or a conquering general be wrong?) everyone has to do it to if you want to succeed in the savage world of war and finance.

Donald Trump’s shameful treatment of airman and war hero Senator John McCain – shot down by Russian jets and Chinese flak over Vietnam – for simply voting his conscience on healthcare (while undergoing cancer treatment) is a national disgrace – never to be forgotten. Armchair general Donald Trump let bone spurs and five deferments keep him from serving his country when asked to serve during the Vietnam War. As Joe Scarborough writes in his latest article in the Washington Post, that never kept The Donald from mastering the game of golf.

The greatness of American leadership is in direct proportion to when our leaders take us to war because they have to versus when leaders take us to war because they want to. Sometimes, war is inevitable, such as when innocent civilians are being burned and blown up with rockets or raped and pillaged by foot soldiers. Other times we are tempted to war by the thrill of the kill.

Sun-Tzu’s book was really just an anthology of the well-known sayings and precepts that surrounded the warring, dynastic culture of early China, first written 300 years before the Bible. The fabled ‘36 Stategems’ foretold of Trump’s latest ham-handed attempt at the ‘madman theory’ (handled far better by actor-president Ronald Reagan vs. the Russians) by calling Kim Jong Un ‘Little Rocketman’ and other (modern presidential) epithets. Dotards aside, the madman theory doesn’t work as well when atoms are split over innocent civilians. From the 3,000 year old Strategems:

Feign madness but keep your balance. Hide behind the mask of a fool, a drunk, or a madman to create confusion about your intentions and motivations. Lure your opponent into underestimating your ability until, overconfident, he drops his guard. Then you may attack.

Note that last part of the stratagem: ‘then you may attack.’ Reading the text of Sun-Tzu and the 36 Stratagems, the sane reader is left with an overwhelming desire to avoid war at all costs. The Chinese know well that war is the result of a leader’s loss of the ‘Mandate of Heaven,’ equal to the Western concept of the ‘divine right of kings.’ The mandate differs, however, in that the ruling elite – informed by largely Confucian ideals – must support successive families, or dynasties, regardless of heredity or social position. If peace and stability are returned and maintained to the Chinese people, a leader had won the Mandate of Heaven. The greatest dynasties in Chinese history were born to then unknown families: the all-powerful Han family set the framework as the greatest dynasty, followed in modern times by the Yuan, Ming and Qing dynasties – each an orphan family, none a cadet branch of the prior. Of the nearly ten dynasties of Chinese hegemony over Mainland China and the Korean Peninsula, five lasted longer than the age of the United States – 241 years or longer. The last dynasty of China, the Qing, and the Last Emperor (following the Boxer Rebellion and the 8 Nation Alliance to overthrow China in 1900) ended the longest, most prosperous kingdom in human history. China had lost the Mandate of Heaven and where Ghengis Khan and his son Kublai and the Mongols brought the ‘outsiders’ to the mainland in 1271, the nations of the West, lead by the United States and President Theodore Roosevelt, were now favored by the Great Mandate – and it has remained in a white house in Washington, D.C. ever since.

Donald Trump inherited this mandate in January of this year and is in terrible danger of losing it for the nation as certain as the Last Emperor of China did in 1900. The unfair(!) treatment of The Donald after his piss-poor response to Puerto Rico and Hurricane Maria, (after his super-energetic, poll-enhancing response to Hurricane Harvey) is the result of his frustration with losing this heavenly mojo. Fair or not, the Mandate of Heaven is a harsh mistress, and bad weather and natural disasters are fair game to judge a leader and his dynasty in fitness for leadership. The tragedy in Las Vegas speaks to the loss of mandated-ness going on here. I just pray that The Donald remembers the most important and last of the ancient 36 stratagems, offered to leaders who find themselves in an unwinnable position:

“Of the Thirty-Six Stratagems, fleeing is best”