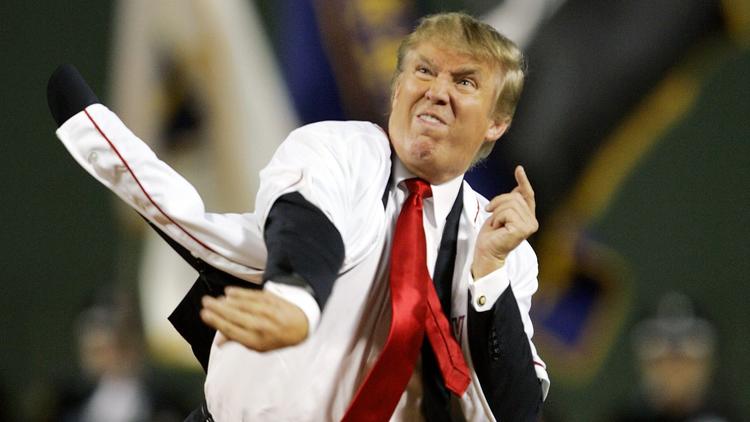 The Red Sox turned it around the next year and won it all. The Yankees? Well, they suck. And they have sucked ever since. Call it The Curse of the Trumpino. After all, he’s a traitor to his so-called team. Hmmm. “So-Called President Trump.” That has a ring to it. Or, how about “The President Who Cried Wolf?” No. Perhaps “The Leaker of the House?” Nah. I think he’s our So-Called President. That because he Tweeted:

The opinion of this so-called judge, which essentially takes law-enforcement away from our country, is ridiculous and will be overturned!

So our Federal Judges “essentially take(s) law-enforcement away from our country?” Just how fucking stupid is he? Isn’t it the job of the U.S. Courts to arbitrate decisions based on U.S. law? Y’know, that separation of powers thing? If said judge threw out the case based on personal bias, would he then be allowing our country to enforce the law? He just keeps going, and going and going and going…

When a country is no longer able to say who can, and who cannot, come in & out, especially for reasons of safety &.security – big trouble!

Trump Cuck and all-around slimy weirdo Roger Stone noted with glee that the smarter a person is, the more likely they are to hate Trump. So Trump’s fucked up behavior makes far more sense when you consider his warped influences. Here’s a story Stone related about a visit in the 80s with Roy Cohn:

He told me to ride down to the courthouse with him. He had a young lawyer with him, and it was clear that Roy knew nothing about the case he was going to argue. But he knew it didn’t matter. He used to say, ‘Don’t tell me the law. Tell me the judge.’ Roy knew how the world worked.

Trump’s ridiculous Tweets about his phone being tapped by Obama invoked the ghost of Joseph McCarthy without ever realizing that it is he, our So-Called President, along with his father Fred Trump, who hired Roy Cohn as their counsel to defend them in cases brought by the federal government against them in the 1970s for racist redlining. Trump is such a pathetic slimeball that he libeled our former president in order to provide ‘limited hangout’ about his voluminous ties to Mother Russia and Azerbaijan. That is exactly what Roger Stone is doing now, trying to get ahead of the story that he coordinated with the Russian hackers before the election on behalf of the Trump team.

Trading in sleaze and blackmail, Roy Cohn is one of the vilest human beings to ever walk the earth. His self-hatred was such that he smeared and denigrated all gay people, leading the U.S. government to ban gays from public office during the Red Scare because they might have been blackmailed and/or compromised. In the late 1980s, Mr. Cohn lobbied friends in the Reagan White House to nominate Donald’s sister Maryanne Trump Barry to the federal bench. (Questioned about this, Mr. Trump said his sister “got the appointment totally on her own merit.”) Totally fucking laughable.

Trump’s frenemy Stone recently admitted to communicating privately with Russian hackers via their #GUCCIFER Twitter account. Stone’s relationship with Donald Trump goes back to Roy Cohn, Stone being a long-time lobbyist for Trump’s casino business and also the leader of the “Draft Trump” campaign. The Stone-Cohn axis of influence over Donald Trump is the single most important factor in the making of our So-Called President. Stone’s rule: “Attack, attack, attack—never defend” and “Admit nothing, deny everything, launch counterattack.” Sound familiar? “Remember,” he said “Politics is not about uniting people. It’s about dividing people. And getting your fifty-one per cent.”

Among other unsavory characters, The Catholic Diocese of New York also hired the disgraced, disbarred Cohn in the 1970s – but Trump, along with super fat gangsters of the New York mob – relished his association with the closeted, self-hating Jew who once held a pen in a dying millionaire’s hand to forge his signature on a will naming himself executor. Roy Cohn was such a close associate of Donald Trump that Trump felt obligated to appear on Cohn’s behalf during his disbarment hearings:

“If I summed it up in one word, I think the primary word I’d use is his loyalty.”

Ravaged from the effects of AIDS, Mr. Cohn nevertheless managed to attend a dinner with his lover, Peter Fraser at Mar-a-Lago in Palm Beach shortly after Trump purchased the property in late 1985. Ah, to have been a fly on that wall! “He was a very good lawyer if he wanted to be,” Mr. Trump said when asked about Mr. Cohn in 1980. Trump was more blunt in his assessment later: “He’s been vicious to others in his protection of me.” I should say so.

Cohn’s actual lover, Australian Peter Fraser, inherited all of Cohn’s possessions after he died: Manhattan townhouse, a weekend place in Greenwich, a Rolls-Royce, his private plane and much more. But the Internal Revenue Service, collecting on Mr. Cohn’s tax debts, confiscated nearly everything. With typical, warped conservative logic, Stone once said that Roy Cohn wasn’t gay:

He [Cohn] was a man who liked having sex with men. Gays were weak, effeminate. He always seemed to have these young blond boys around. It just wasn’t discussed. He was interested in power and access. He told me his absolute goal was to die completely broke and owing millions to the I.R.S. He succeeded in that.

Cohn’s lover Fraser did get to keep a pair of exclusive Burburry cuff links Mr. Trump had given Mr. Cohn before he died. Years later, Mr. Fraser had them appraised; they were fake, he said.

* Where Donald Trump insulted a Federal Judge appointed by George W. Bush after the judge’s decision to halt his first idiotic Executive Order on immigration, we at the Newes have chosen “So-Called President” to refer to him going forward. What was Trump’s problem with the judge in question? He based his ruling on American law and jurisprudence.

By NewesFromAmerica in News on March 15, 2017.
← The Most Hated Man in America Warning: Fake News Alert! →