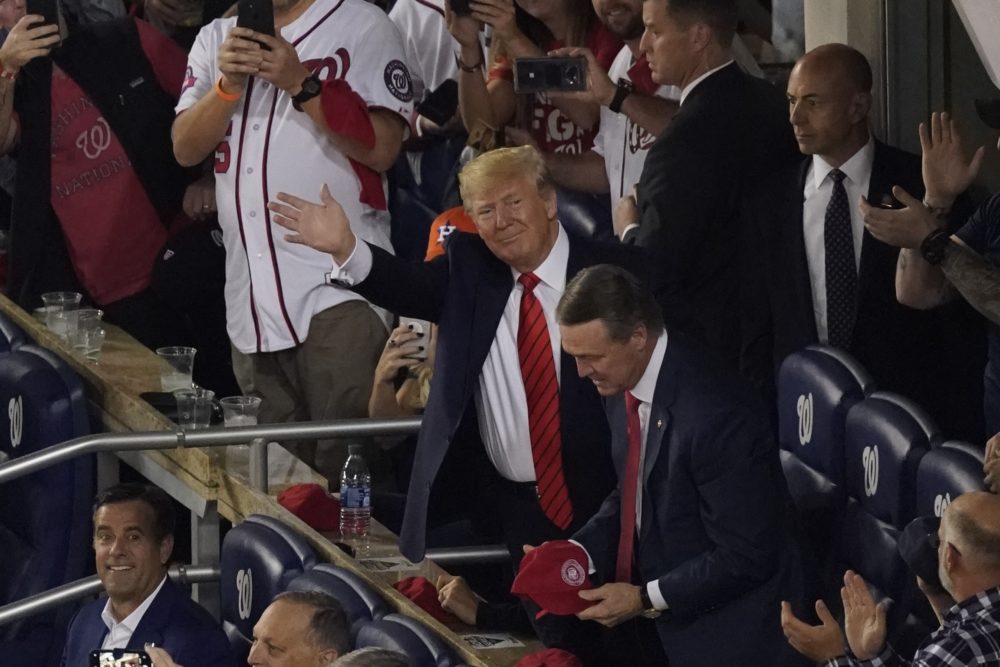 After Donald Trump’s most presidential moment in office in his measured and decisive blow against the Syrian airfields last year, after a chlorine gas-attack, I noted that then-US Press Secretary Sean Spicer (currently working as an, um, flamboyant contestant on a TV game show) hadn’t “Let his boss down” as he groveled at the podium saying exactly what Trump wanted him to say. Do you remember that idiotic statement, attributed to the press secretary (as opposed to the latest idiotic one the so-called ‘Press Secretary’ blathered) put into their mealy-mouths, again, by their boss Donald J. Trump? Spicer said back then that Bashar al-Assad was even more evil than Hitler, who never gassed his ‘own people’ or women and children. The utter contempt for history at the time was mind-numbing. Just before the World Series game last Sunday, our president* had his second-most presidential moment in office, however this time his track record is so widely-known (and without a real press secretary to soften his idiocy) that what Trump did was no surprise to anyone, as Trump torpedoed yet another A1 good-news story by blathering crazy, stupid, fake shit when all he had to do was go to the podium and say what he was supposed to say. In comparison to former President Barack Obama at the podium after the Bin Laden raid, Trump sounded like a lunatic. Trump thought the good news would insure him cheers from fans, local Washington DC baseball fans, enjoying a Sunday night game in October at Nationals Park.

The weather was a balmy 80-degrees so fans were totally pumped to watch their ace, Max Scherzer go up against the Astros at home in game five of the World Series, however DC fans didn’t count on The ‘Curse of the Trumpino,’ which recently laid ravage to the New York Yankees, eliminated by those aforementioned, plucky Houston Astros (Yankees suck!). Scherzer was scratched from the lineup almost the same time the White House announced Trump would attend the game, Scherzer struck with neck spasms at the very thought of the nightmare spectacle. The Nationals were screwed the moment Trump said that he was going to the game and the fact that he was lustily bood by the crowd was as predictable as the Sun rising. Just to make sure he was as much of a dimwit as he could possibly be, Trump took along the insufferable asshole Representative Matt Gaetz to the game with him instead of his own kids. He also took along wounded veterans as human shields (who were just as heartily cheered when shown on the Jumbotron), but the second his big-boned face appeared on the screen almost the entire crowd stood up and bood and also began chanting something I did NOT expect: “Lock Him Up.” I’m fond of remembering some of my dear, departed mother’s ‘home-spun’ sayings and one in particular comes to mind here: “What’s good for the goose is good for the gander.”

As a Red Sox fan, baseball in 2019 wasn’t consuming all of my waking hours from March through October this year because the Red Sox weren’t very good, however since 2004 the Red Sox have won four world championships and I now know that my team is no longer cursed. Years such as this one, I’m usually reduced to cheering for any team that beats the New York Yankees, but the Nationals had karma on their side after their fans took over. The Red Sox, cursed for 86 years before the drama of (Trump-supporting) Curt Schilling’s bloody sock, the Sox were afflicted by the original ‘Curse of the Bambino,’ laid on their heads as soon as owner Harry  Frazee sold Babe Ruth to the Yankees in 1919 to get money to produce the pitiful Broadway flop, No, No Nanette and even though Curt is a total MAGA knucklehead, I still love him because he helped reverse the curse. The last time a team from Washington won the World Series was 95 years ago and even though the Astros were a great team this year, the Nats were on a mission, not to mention the National’s other ace, phenom Stephen Strasburg, MVP of the series was waiting in the wings. There have been many takes on the boos and ‘lock him up’ chants last Sunday but one of the best was by local guy Steve Almond in his commentary on WBUR, Boston University’s awesome college radio station, where he cringed a little (as I did) after the scary chants:

The way to rid ourselves of Trump is not to revile him, but to deprive him of the oxygen that sustains him: our attention. To the extent possible, we have to turn away from our desire for emotional revenge. We should focus on the ongoing impeachment inquiry not because we hate Trump, but because we cherish democracy and want to protect the rule of law. We should pressure senators to convict Trump not for being a “human scum,” but because he has so blatantly abused the office of the presidency.

Our last president, faced with partisan rancor, was fond of telling crowds, “Don’t boo — vote!” Given the threat Trump poses to free and fair elections, this exhortation no longer feels sufficient. As citizens of good faith, we have to focus on the candidates we plan to support in 2020, and the actions — beyond merely voting — required to bring them into power.

Last night, the Nationals won game seven of the World Series in Houston, Texas in a reversal of bad mojo brought on by Donald Trump and their improbable, come from behind championship run on the road is one for the books. In booing our president*, Nats fans reversed their curse and they also made red hats cool again in the process — as long as they sport a script ‘W’ for Washington, the District of Columbia — our nation’s capital and the home of the World Champion Washington Nationals.

By NewesFromAmerica in Sports on October 31, 2019.
← Kenneth, What is the Frequency? A Very Big Thing →